The plastic world of "The Graduate" 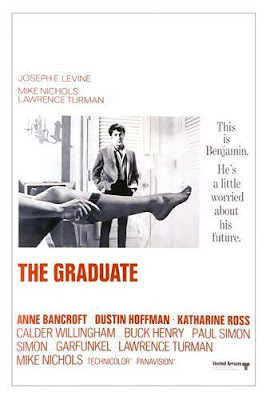 I was recently watching The Pumpkin Eater on Antenna TV. A black-and-white drama about a disintegrating marriage, it stars Anne Bancroft and Peter Finch. I was thinking less of that particular film than I was of these two formidable actors, both of whom have since passed on. Finch knocked around the international film scene for three decades before winning a posthumous Oscar for his role as the TV anchorman who whipped the audience into a frenzy (“I’m mad as hell and I’m not going to take this anymore!”) in 1976’s Network. He was 60 when he died in 1977. If he had lived, where would his Oscar have taken him? Maybe if he had been younger and his belated success had come even later, he might have had as full a career as Anthony Hopkins who followed his Oscar for Silence of the Lambs with a variety of meaty roles: Picasso, C. S. Lewis, John Adams and Richard Nixon.

Bancroft was best known for playing the seductive cradle robber, Mrs. Robinson, in 1967’s The Graduate. The biggest grossing movie of 1968, it was also critically acclaimed and a contender for the Best Picture Oscar. It’s a movie that proves that context is everything. In the late ‘60s, Dustin Hoffman’s Benjamin Braddock was the hero, a recent college graduate who spends the summer after completing his degree aimlessly drifting, completely unprepared for the future. Mrs. Robinson, a middle-aged alcoholic friend of his parents, seduces him and they carry on their clandestine affair in assorted motel rooms. But the clueless Mr. Robinson insists Ben take his daughter out on a date and the two fall in love. As Roger Ebert observed when revisiting the movie years later, Mrs. Robinson, seen by most viewers as the villain when the film was released, seems more sympathetic today. You see, in the era of the film’s original release, the “Generation Gap,” one of the effects of the Baby Boom following World War II, was at its height, with young people growing their hair, smoking dope, and opposing just about anything that their parents supported (Nixon, Vietnam, conservative attire, the idea that one should be respectably employed). Naïve little Ben was portrayed as a wounded puppy being dragged on a leash into a world of savage, immoral pit bulls. At a party in his honor, one of his parents’ friends whispers some career advice into his ear: “Plastics.”

Plastics indeed. The world of his parents is plastic: their affluence is merely a symbol of their cheap values, their double standards, and hypocrisy. The whispered advice is as much a seduction as Mrs. Robinson’s sexual overtures. One of those cheap values is obviously their religious beliefs. What those beliefs involve is never stated, but, at the end, the Robinsons’ daughter is being married to the blue-eyed blonde All-American jock that is the antithesis of Ben. The setting is a church and when Ben disrupts the ceremony and drags his true love away, he uses a large cross to beat back her enraged family. A cross is used to ward off vampires, and, in a sense, that’s what the older generation represents in The Graduate: vampires, the undead who feed on the blood of the living. They appear to be alive themselves, but they’re dead in all but the most literal sense. They’ve sold their souls to the crass materialistic society that America has become, and inhabit a series of coffins: the big cars they drive to the big office in the big corporation then return in their big car to the big house at night before rising from the dead to face another soulless day. Ben will have no part of it. He is, indeed, The Graduate, but not only from a four year college. He has graduated beyond the smoothly corrupt life of his parents.

That was in 1967. By the 1980s, The Graduate was already looking a little dated. The young people of the ‘60s had cut their hair and taken their place in the same society they once protested. Some of them never made it out of the ‘70s alive, but those that did, though paying lip service to rebellion and embracing “progressive” politics simply traded their parents’ plastic world for an equally plastic world of their own. Their children, however, helped elect Ronald Reagan to the White House, and armed with degrees in Business Administration, set out for Wall Street to begin a new wave of soullessness. And, to use Kurt Vonnegut’s pet phrase, so it goes.

VISIT MY KINDLE STORE AT AMAZON